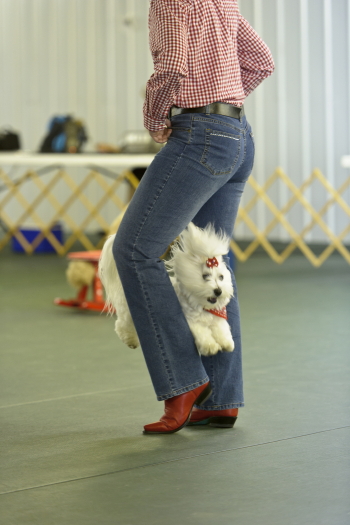 "Musical Freestyle is a choreographed musical program performed by handlers and their dogs. The object of musical freestyle is to display the dog and handler in a creative, innovative and original dance, using music and intricate movements to showcase teamwork, artistry, costuming, athleticism and style in interpreting the theme of the music. Heelwork-to-Music incorporates traditional dog obedience and the art of dressage with the inclusion of musical interpretation, dance elements, and costuming with an emphasis on non-standard obedience movements. Both Musical Freestyle and Heelwork-To-Music routines should create a visually exciting display which is enjoyable to watch and which is equally enjoyable to dogs and handlers executing the programs. Canine freestyle is a showcase that truly demonstrates the joys and fun of bonding with your pet."

Musical Canine Freestyle or just Canine Freestyle is simply dancing with dogs to music. It is a fun sport for the owners and dogs, and the audience. We at Ventre Advertising Inc. call it the "Tail Waggin' Sport"! Based on basic obedience training, it adds other dimensions such as music, timing, costuming, routine development, showmanship.

In order to dance with your dog(s) to music, there are some simple basic procedures that you should follow. First, you start by selecting a musical composition to which you would like to dance. It may be one particular piece or you may edit several different pieces of music to create your own special music. Once you have the music, the second step is choreographing a routine to your music. This means you should design steps and movements for yourself and your dog(s) to execute that relate to the music you have selected. They may be comprised of basic obedience steps, variations on obedience steps, dressage movements, tricks or any new step you may create. It is important to plan the steps and movements within a defined area, covering the area as fully as possible. The third step is selecting costuming for you and your dog(s). Your outfits should coordinate with the theme of the music you have selected and be pleasing to an audience.

Once you have completed these three basic steps and put it all together, you now have a musical canine freestyle performance that you can take to a demo or a competition event. At a competition, there is a fourth step you must consider-meeting the rules/guidelines defined by the governing (musical) canine freestyle organization.

Here are a few others who say they invented this sport that I have met since 1990: a retired teacher who did pattycake on a tennis court with her dog to music; a child ballerina who was practicing in her living room for a recital when her mother, a dog trainer, noticed their dog dancing with her; A skater, who also took his dog to obedience school noticed his dog working along with him as he practiced his moves; A therapy dog and her owner who decided to strut their stuff to music to make it more appealing to the seniors they were visiting.

When I say to my friends that I am going to dance with ET tonight, they always look at me with a funny face... And yes, I am dancing with my ET, every Tuesday night! let me tell you a little about this.

I started few years ago doing obedience training with Shaglear ET at Polana. From day one, he was an excellent learner. But, when I tried to do obedience trials, it was another story... ET got his first 2 legs however I was not really enjoying the activity. My instructor, Chris, said that it was me who was the problem. ET was feeling my stress and was not so good. Then Chris told me she was starting a dance class and if I wanted to try, ET would be probably an excellent candidate. So, I decided yes, I would try.

We use the clicker method training. ET loves food and he responds extremely well with this technique. The dogs are taught different movements and we often do routines alone or in a group with music. ET sure does enjoy Tuesday sessions. He always starts to get wound-up when I go for his leash, food and water. He runs to the car and away we go! In class, he learned very quickly how to step back, to make figure 8 between my legs and to change direction.

One of my favourite routines is to have him walk between my legs and raise his paws up to me.

We have our routine, he and I. We also practice routines with my friends, a group of ladies who come every Tuesday night with their dogs. 8 in all; we enjoy ourselves. It's fun to see all these dogs, small, big, white and black, dancing with us to the tunes of ABBA!

Our show last fall in a local mall was quite a success. Group as well as individual performances made quite a hit with the crowd. I didn't feel the stress of the obedience trials as ET was following me with a big grin on his face, paying attention, and just happy to moving around me!

I'm sure we will dance on, learning more routines and my daughter Audrey, who is eager to learn, will ably aid us. As for me, I wish I could spend more time just practising ..... practising ......and practising!